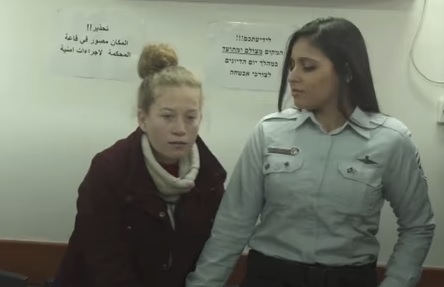 The court case against 17-year old Ahed Tamimi, the Palestinian girl that slapped an Israeli soldier in the face on December 15, 2017, is expected to start on Tuesday, February 13.

Maybe. The judge of the military tribunal has postponed the case so many times ‘for further inquiry’ that another delay is very likely.

One might wonder what further inquiry is needed when everything the girl did was videotaped and has since gone viral, sparking worldwide outrage.

December 15 was not the first time Ahed Tamimi confronted the Israeli occupation forces.

Note my use of the term ‘occupation forces, not ‘security forces’ as Israel and most mainstream media like to use. Let me get back to this later.

The international attention on her case is a source of extreme embarrassment for Israel.

But the treatment she is getting is fairly routine. On any day of the year, Israel holds an average of 300 Palestinian minors in custody. Their transport to Israel proper is in itself a first violation of the Geneva Conventions that specifically forbid occupation forces to abduct citizens out of the territories they occupy.

On top of that, Israel interrogates minors without the presence of parents (or a person of trust appointed by the family).

Constant postponement of trial dates is another form of psychological torture, as is frequent change of prison, involving uncomfortable transport, any time of day or night.

Permanent bright light in the cell, frequent checkups, to induce sleep deprivation, threats of physical violence during interrogation – it’s all part of the methodology.

The reality of occupation

In other words, what the military occupation court is doing with Ahed Tamimi is just that, routine. The only difference is the international exposure she gets.

For many people all over the world, it is the first time that they see the reality of the occupation.

One can apply so many media tricks, add obfuscating context and non-related images of violent incidents but nothing can alter the revulsion any decent person will feel when confronted with the image of a little girl handcuffed and surrounded by security staff, risking up to ten years for daring to stand up against 50 years of brutal injustice.

On my use of the term ‘occupation forces’ instead of ‘security forces’: a choice of words reveals a lot about where the writer stands on the issue.

Here the reader can deduce correctly that I stand on the side of the Palestinian people. Yet, ‘occupation’ is the journalistically objective reality on the ground. Even if the occupation of the West Bank would be justified for security reasons (which it clearly is not), even then, the Israeli army is an occupation force.

Yet, my use of the term ‘occupation forces’ is seen as taking sides. Why? Asking that question is going into the debate on what media objectivity really means.

Mainstream media take pride in using ‘objective’ or ‘neutral’ words, not taking sides, just reporting the facts, informing. Nothing could be further from the truth than in mainstream reporting on the Middle East.

When Palestinians resist the daily brutality of the occupation, the humiliation at checkpoints, arbitrary detention, routine torture of prisoners, summary execution of stone throwers (many times not even that), it is ‘provocation’, ‘escalation’, ‘terrorism’.

This mainstream journalistic objectivity is not objective at all. It means what the media want it to mean. The same goes for that other dogma of neutrality. It is not a neutral term. Let me give a simple example.

Is a bystander neutral when not taking sides in a fight between a trained six-foot weightlifter and a small skinny boy? Obviously not.

Mainstream media keep repeating the terminology used by Israeli authorities as objective, factual, valid without need of proof, while Palestinian arguments are seen and reproduced as partisan. A recent example can be found in the reporting on the downing of an Israeli fighter jet. ‘A dangerous escalation’, a violation of sovereignty’, the media said.

The appearance of an Iranian drone (possible, not yet corroborated, but already reproduced as fact) over Israeli airspace is indeed objectively speaking a breach of sovereignty and a dangerous escalation. However, what is totally missing in this isolated fact is context, and in doing so an impression, a perspective is created that totally distorts objective reality.

On purpose, in my opinion.

Where is the relevant information that Israel has had drones flying over Syria for years prior to this one incident, same with the bombing of targets within Syrian territory. It’s not that such data are totally unmentioned, they are framed differently, using terms like ‘defense’, ‘taking out terrorists’.

Gone also is the fact that Israel has been occupying part of Syrian territory for 50 years; is there no breach of sovereignty there?

Whatever one might think of the regime in Syria, taking down a military plane over its own territory is no escalation, it is defense, it is protection of security. The decades long aggressor here is Israel. Yet, that is not the impression one gets from reading or watching the news about this incident.

Critics of the occupation often call out this travesty of objective journalism as proof of unprincipled double standards, as western hypocrisy. Actually, the opposite is true.

European and American media do not apply double standards at all.

What they do is follow to the letter another principle: what we (or our allies) do is good, always, everywhere, yes, we make errors, mistakes, tragic sometimes (for us, not the victims); what the others do is bad, period, no further context needed.

This is how Western media can report on the daily horror in Yemen, without mentioning the direct involvement of their own governments in that slaughter.

This approach is used by mainstream journalists to claim that “we do not bomb people, hospitals, schools on purpose, yes, we sometimes make tragic mistakes, but purposely? Never!”.

No apologetic context is needed when Russian bombers do exactly the same.

‘Not to take sides’ is taking sides. In Palestine, that means taking the side of the occupier against the occupied, choosing the strong over the weak, the heavily armed over the defenseless. This is not objective reporting. It is a scam that helps to prolong the occupation for eternity.

Ahed Tamimi faces up to ten years in prison for a military occupation tribunal, while a colonial settler gets a fine for an Israeli civil court for exactly the same act, slapping a soldier in the face.

This is not justice, it is occupation, repression, arbitrary detention, summary execution, apartheid, and colonialism. Those are the correct words to use for the simple reason that they correspond to reality.

Terms such as ‘conflict’, ‘security’, ‘maintaining order’ are not objective.